I’ve finally made it to the last post on my little mans’ birthday party. I promise there will be no more zombies after this … at least until Halloween anyway! The last few photos I’m going to share are of the savoury party food and games.

When I’m deciding on the food to serve at a party, I like to try and tie it in with the theme. The kids may or may not notice, but I like to think it adds a bit of fun to the event! I made food tents for almost everything – and of course we stuck with the aim of grossing out the boys as much as possible! 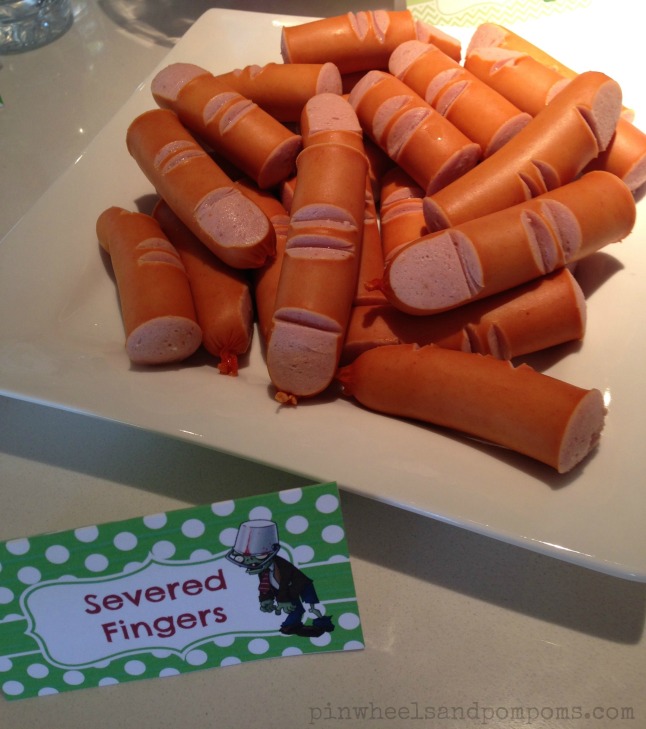 Severed Fingers were hot dog sausages chopped in half, and trimmed to look like fingers. Add a dash of blood (tomato sauce) and job done. If I make these again I won’t slice so deep for the fingernails and ‘knuckle wrinkles’ because the cuts expanded when the sausages were cooked! {I was just having another look at the photo and thought I should have stuck a something in the end to look like bone – or would that have been taking it a step too far 😉 }

Roasted Eyeballs were a bowl full of meatballs.

Plant Vomit was fruit salad – I’m not completely sure about the name I chose for that one, but it seemed like a good idea at the time 🙄 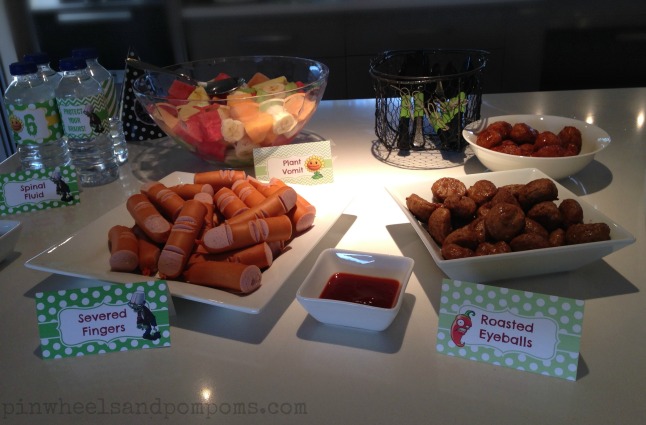 Decomposing Limbs were going to be marinated chicken drumettes (trimmed wings) but they were forgotten in the party confusion. Not to worry, the boys had plenty to eat! And as for the sandwiches, I didn’t manage to come up with a zombie name for them. I put that one in the too hard basket!

We played a few zombie games during the party. I had colouring in pages ready for the boys to do when they arrived, but they were way too full of energy to think about sitting still and colouring. Silly me, what was I thinking?! 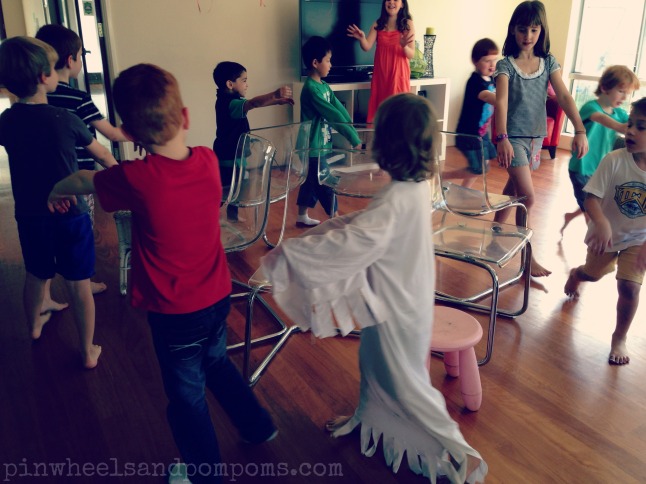 A round of Zombie musical chairs was popular. The boys walked in a circle while we played Thriller, their arms out like zombies. Pulling a contorted face was optional but there sure was a lot of zombie moaning going on!

We also had a relay race. The boys got into teams and ran wearing zombie glasses and either a toy bucket or traffic cone on their head. They passed the dress ups on to their team mate who ran next, and so on. 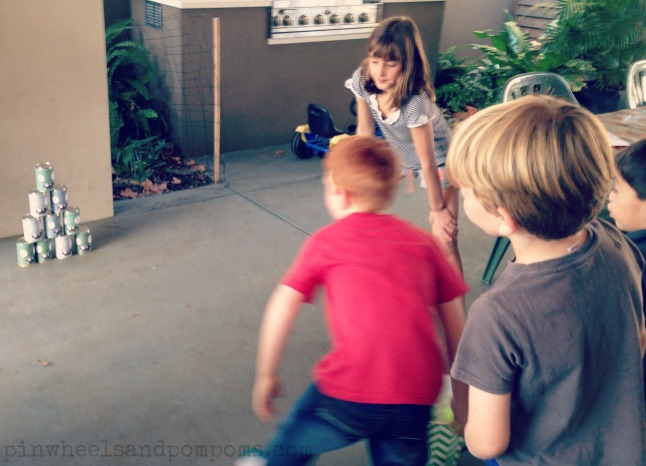 The zombie bowling was popular, they kept coming back to that throughout the afternoon. Other games we had planned went unplayed. The boys were having a ball bouncing on the trampoline, trying to kill the floating balloon zombies and at times each other with my little mans’ brand new Nerf guns

They made their own game at one point, seeing who could squeal the loudest. I didn’t know boys did that – it nearly blew my eardrums! It was a great afternoon though, and thanks to my big girls for helping out with the games!

Now that is one serious zombie girl 😀